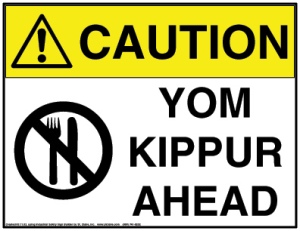 Yom Kippur, also known as the Day of Atonement, is the holiest day of the year in Judaism. Its central themes are atonement and repentance. Jews traditionally observe this holy day with a 25-hour period of fasting and intensive prayer, often spending most of the day in synagogue services. Yom Kippur completes the annual period known in Judaism as the High Holy Days or Yamim Nora’im (“Days of Awe”).

Yom Kippur is the tenth day of the month of Tishrei (September or October). According to Jewish tradition, God inscribes each person’s fate for the coming year into a book, the Book of Life, on Rosh Hashanah, and waits until Yom Kippur to “seal” the verdict. During the Days of Awe, adherents to Judaism try to amend his or her behavior and seek forgiveness for wrongs done against God and against other human beings. The evening and day of Yom Kippur are set aside for public and private petitions and confessions of guilt. At the end of Yom Kippur, one considers themselves absolved by God.

There are five afflictions associated with observance of Yom Kippur. The Seder Moed states that the following abstentions (deliberate self-denials) meet the requirements for Yom Kippur.

On this day the high priest (Kohen Gadol) makes sacrifice for his own sin and the sins of the people. He reconsecrates the entire tent of meeting and its surrounds for the worship and service of God. This is the only day of the year that the high priest is allowed to enter the Most Holy Place and sprinkle blood for the atonement of sin. The ceremony is described in the sixteenth chapter of the Book of Leviticus.

God’s repeated instruction to the people is that they are to deny themselves. They must abstain from food and other pleasures, to fast in sorrow for their sins. This is not a time for joyful celebration, but for deep repentance and solemn sacrifice.

While the Temple in Jerusalem was standing (from Biblical times through 70 C.E.), the Kohen Gadol was mandated by the Torah to perform a complex set of special services and sacrifices for Yom Kippur to attain Divine atonement, the word “kippur” meaning “atone” in Hebrew. These services were considered to be the most important parts of Yom Kippur because through them the Kohen Gadol made atonement for all Jews and the world. During the service, the Kohen Gadol entered the Holy of Holies in the center of the Temple, the only time of the year that anyone went inside. Doing so required special purification and preparation, including five immersions in a mikvah (ritual bath), and four changes of clothing.

Seven days prior to Yom Kippur, the Kohen Gadol was sequestered in the Palhedrin Chamber in the Temple, where he reviewed (studied) the service with the sages familiar with the Temple, and was sprinkled with spring water containing ashes of the Red Heifer as purification. The Talmud (Tractate Yoma) also reports that he practiced the incense offering ritual in the Avitnas Chamber.

On the day of Yom Kippur, the Kohen Gadol had to follow a precise order of services, sacrifices, and purifications:

The Kohen Gadol wore five sets of garments (three golden and two white linen), immersed in the mikvah five times, and washed his hands and feet ten times. Sacrifices included two (daily) lambs, one bull, two goats, and two rams, with accompanying mincha (grain) offerings, wine libations, and three incense offerings (the regular two daily and an additional one for Yom Kippur). The Kohen Gadol entered the Holy of Holies three times. The Tetragrammaton was pronounced three times, once for each confession.

The Day of Atonement has deep theological significance in the New Testament (B’rit Chadashah). Chapters 8 to 10 of the Epistle to the Hebrews argue that it pointed forward to the work of Jesus Christ (Yeshua HaMashiach) as our High Priest.

Mary Fairchild wrote, “The Tabernacle and the Temple gave a clear picture of how sin separates us from the holiness of God. In Bible times, only the High Priest could enter the Holy of Holies by passing through the heavy veil that hung from ceiling to floor, creating a barrier between the people and the presence of God. Once a year on the Day of Atonement, the High Priest would enter and offer a blood sacrifice to cover the sins of the people. However, at the very moment when Jesus died on the cross, Matthew 27:51 says, “the veil of the temple was torn in two from top to bottom; and the earth quaked, and the rocks were split.””

Isaiah the Prophet wrote, “Come now, let us reason together, says the LORD: though your sins are like scarlet, they shall be as white as snow; though they are red like crimson, they shall become like wool” (Isaiah 1:18 ESV). Many Christians are not aware of the significance of this passage. During the time of the Second Temple, a strip of wool would be dipped into the blood of the sin offering which had been sacrificed. This wool was cut into two pieces, one was kept in Jerusalem at the Second Temple, and the other was tied to the horns of the goat for Azazel. When the strip of wool that was in Jerusalem turned white, the High Priest knew that the sacrifice was accepted by God for the atonement (covering) of the sins of the people.

Chapters 8 to 10 of the Epistle to the Hebrews also clearly explains how Jesus Christ became our High Priest and entered heaven (the Holy of Holies), once and for all, not by the blood of sacrificial animals, but by his own precious blood on the cross at Calvary. Christ (Messiah) Himself was the atoning sacrifice for our sins; thus, he obtained for us eternal redemption, All believers accept the sacrifice of Jesus Christ as the fulfillment of Yom Kippur, the final atonement for sin.

The Day of Atonement is significant for Christians. It pictures Christ’s sacrifice for our sins and that Satan has a role and will be sent away (and bound for the millennium). While many Christians somewhat understand this, because they do not keep this and the other Holy Days, they often do not have a proper view of God’s entire plan of salvation, such as the role of Satan and Christ.

This Day of Atonement provides a type/antitype not only what has happened (with Christ) but some of what will happen with Satan (while the holy days that follow show other events that will happen later). This is information that Christians living in these latter days should value.

I recommend Passion for Truth Ministries‘ video by Jim Staley, God’s Prophetic Calendar: Yom Kippur for additional studies on the Day of Atonement.