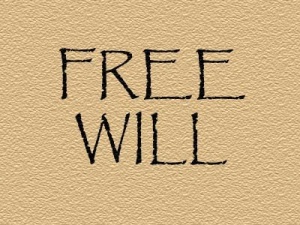 Free will is the ability of agents to make choices free from certain kinds of constraints. The existence of free will and its exact nature and definition have long been debated in philosophy. Historically, the constraint of dominant concern has been the metaphysical constraint of determinism, which stated most simply is the notion that the present dictates the future entirely, that every occurrence results from prior events. The two main positions within that debate are metaphysical libertarianism, the claim that determinism is false, so free will exists is at least possible—and hard determinism, the claim that determinism is true, so free will does not exist.

The principle of free will has religious, ethical, and scientific implications. For example, in the religious realm, free will implies that individual will and choices can coexist with an omnipotentdivinity. In ethics, it may hold implications for whether individuals can be held morally accountable for their actions. In science, neuroscientific findings regarding free will may suggest different ways of predicting human behavior.

If humans are responsible for their actions, they must have free will, the ability to choose right from wrong. But ideas about God‘s providence and scientific notions of biological and psychological determinism create problems for the presumption of free will. This paradox has fascinated Jewish thinkers since the Talmud.

According to Josephus, the Sadducees believed that:

The Sadducees rejected the belief in resurrection of the dead, which was a central tenet believed by Pharisees and by Early Christians. This often provoked hostilities. Furthermore, the Sadducees rejected the Oral Law as proposed by the Pharisees. Rather, they saw the Torah as the sole source of divine authority. The written law, in its depiction of the priesthood, corroborated the power and enforced the hegemony of the Sadducees in Judean society.

The Pharisees (Latin pharisæus, –i; from Hebrew פְּרוּשִׁים pĕrûshîm, pl. of פָּרוּשׁpārûsh, meaning “set apart”, Qal passive participle of the verb פָּרָשׁ pārāsh,[1][2]through Greek φαρισαῖος, -ου pharisaios[3]) were at various times a political party, a social movement, and a school of thought among Jews during the Second Temple period beginning under the Hasmonean dynasty (140–37 BCE) in the wake of theMaccabean Revolt.

Conflicts between the Pharisees and the Sadducees took place in the context of much broader and longstanding social and religious conflicts among Jews dating back to the Babylonian captivity and exacerbated by the Roman conquest. One conflict was class, between the wealthy and the poor, as the Sadducees included mainly the priestly and aristocratic families. Another conflict was cultural, between those who favored Hellenization and those who resisted it. A third was juridico-religious, between those who emphasized the importance of the Second Temple with its cultic rites and services, and those who emphasized the importance of other Mosaic laws and prophetic values. A fourth point of conflict, specifically religious, involved different interpretations of the Torah and how to apply it to current Jewish life, with the Sadducees recognizing only the Written Torah and rejecting doctrines such as the Oral Torah and the Resurrection of the Dead.

Free will in theology is an important part of the debate on free will in general. This article discusses the doctrine of free will as it has been, and is, interpreted within the various branches of Christianity, Judaism, Islam, Hinduism and Zoroastrianism. Religions vary greatly in their response to the Standard argument against free will, and thus might appeal to any number of responses to “the paradox of free will” – the claim that omniscience and free will are incompatible.

The Catholic Encyclopedia says, “The question of free will, moral liberty, or the liberum arbitrium of the Schoolmen, ranks amongst the three or four most important philosophical problems of all time. It ramifies into ethics, theology, metaphysics, andpsychology. The view adopted in response to it will determine a man’s position in regard to the most momentous issues that present themselves to the human mind. On the one hand, does man possess genuinemoral freedom, power of real choice, true ability to determine the course of his thoughts and volitions, to decide which motives shall prevail within his mind, to modify and mould his own character? Or, on the other, are man’s thoughts and volitions, his character and external actions, all merely the inevitable outcome of his circumstances? Are they all inexorably predetermined in every detail along rigid lines by events of the past, over which he himself has had no sort of control? This is the real import of the free-will problem.